Fury (There Will Be Blood)

Last weekend a mélange of various white nationalist hate groups – including the KKK and neo-Nazis – converged on Charlottesville, Virginia. While they were there to ostensibly protest the removal of a statue of Confederate general Robert E. Lee, the all too predictable result was chaos and bloodshed.

Given the times we live in, nobody should be surprised by the events in Charlottesville. As I’ve noted before, technology has changed our lives in many ways – helping to empower those who had previously been marginalized while the resulting changes threaten those who had benefited from the previous social order.

Over the past 50 years or so the anger of those who are part of the fading old order has grown, often egged on by various politicians, media personalities and others. The presidential campaign and election of Donald Trump stirred things up even more. Trump’s rhetoric, often tinged with intolerance and hints of violence, invoked a mythical glorious past in which “true Americans” (mainly white and male) were in control and not threatened by “others” either within or outside the country.

In addition to further inciting the anger of his predominantly white base, Trump’s campaign and election has been seen as a signal for fringe right-wing extremists to come out into the open and push their white nationalist agenda. This has led to a gathering storm of unreasoning anger against contemporary society and its values, and against those who embrace them.

Given the huge divide in our country today, as well as the rising passions and anger of those opposed to change, the question arises: how will this end? The answer, I fear, is: there will be blood. Once a mob gets going, it is not open to reason. All too often, the only thing that quells the passions of a mob is some event – to which it is a party – that is so horrific that people are shocked back into reality.

It tells the story of Joe Wilson (Spencer Tracy), an innocent man who is accused of murder simply because he was a stranger passing through a small town shortly after a murder had been committed. Agitated about the crime and suspicious of this stranger, the locals soon turn into a crazed mob that gets so worked up they storm and set fire to the jail. In the conflagration that follows, Wilson is apparently killed. The mob’s passions subside with the flames, and in the cold light of the following day the shock of what they’d done fills the perpetrators with shame and denial. Nobody wants to acknowledge what they had done; they just want to go back to their normal lives. Events in the rest of the movie show that isn’t possible.

I personally saw something similar happen when I was living in Panama and going to school in the Canal Zone in 1964. To keep peace with Panama, President Kennedy agreed in 1963 to fly the Panamanian flag wherever the US flag was flown in the Canal Zone. After his death that November, the Canal Zone governor decided to mollify Zonian anger over the Panamanian flags by limiting where US flags were flown. That further angered the Zonians: demonstrations by Americans in the Zone broke out, passions rose, some Panamanian students appeared wanting to symbolically raise their flag, a scuffle broke out, and the end result was 4 days of rioting, millions in property damage and at least 28 dead. After those riots Zonians acted as if they never wanted to acknowledge what had happened, and minimal resistance was put up to the Panamanian flags flying with American flags throughout the Zone. Eventually, canal treaty negotiations opened because of that episode led to the dissolution of the Canal Zone all together. 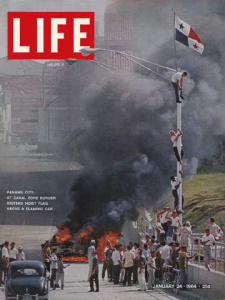 Finally, another example of how mobs can be radically shaken back to reality by the horror of the results of their actions is Germany. Many Germans became passionate followers of Adolf Hitler in the 1930s, and embraced his vision of the Third Reich and the Aryan master race. However, since the end of World War II and the revelations surrounding the Holocaust, most Germans want nothing to do with Nazis and their beliefs.

Last weekend’s events in Charlottesville were very disturbing, and the sight of that car driving into the crowd was horrific. Unfortunately, it doesn’t appear to have been horrific enough. Those involved in the extreme rightist rally don’t appear at all shamed by what happened; instead at least some of them are branding it a “success.” They’re also making plans for more rallies and marches. It also appears Trump has not been shocked into completely renouncing the extremist groups involved in that rally. Although he eventually issued a statement condemning those groups, it did not convey any of the passion of the many criticisms of others he is known for.

Sadly, it appears events have not yet shaken the extreme rightists – or Trump and his loyal followers – back into reality. I fear something much more horrific is yet to come.

The image of the Life magazine cover was taken from Wikipedia. Though this image is subject to copyright, its use is covered by the U.S. fair use laws, and the stricter requirements of Wikipedia’s non-free content policies, because:

I've been interested in current events since at least the mid 1960's, and in ideas from modern science since the early 1990's. My website Quantum Age, which has been online since 1996, presents a basic framework for applying ideas from modern science to today's world. In this blog I discuss current events in the context of that framework.
View all posts by Dave Higgins →
This entry was posted in energy/flow and tagged alt right, America, Charlottesville, mobs, Republicans, Trump, white nationalists. Bookmark the permalink.