Every once in a while the Albany area turns into “Hollywood on the Hudson,” as a film crew for this or that movie comes to town. Each time this happens, there is a curious kind of encounter between our usual, everyday reality and the Fantasyland reality that’s inherent in making a movie.

A few movies are filmed here because that’s where they’re set; the most famous of those is Ironweed.  Numerous others – like Seabiscuit, Scent of a Woman, The Horse Whisperer and the upcoming Taking Woodstock – are filmed in whole or part around here because of film-friendly settings.

Over the past two weeks we’ve had both the pleasure and the hassle of having another movie – Salt – film a chase scene on our main highway interchange in downtown Albany. Apparently, that interchange looks something like one in Washington D.C. And rather than inconvenience all the people in Washington, the movie’s deciders decided it would be better to inconvenience us. Heck, they probably figured we’d enjoy the inconvenience. At least there wouldn’t be any Ferraris involved.

Early on, they were right. When the movie crew arrived in town, everyone got excited. Those of us with office windows overlooking the highway could see cars and trucks lined up for a take in one spot or another on the interchange. Some local people walked to where they could get a glimpse of the activities – from a street, the pedestrian bridge, or maybe a parking garage. The Albany Times-Union even snapped a bunch of pictures of the activities, including a brief appearance in town of the movie’s big star, Angelina Jolie.

It was interesting to see how an event like this can change your perspective about something familiar. Before the news of this filming, those of us who live or work in the area generally looked at the interchange in question as something to get through between Point A and Point B. Sure, when looked at from above it had a certain flashiness about it – kind of like some highway engineers were showing off. But for the most part it was still just another part of the local highway system that could get choked with cars during rush hour.

A view of some of Albany's soon-to-be-famous ramps

But the day the shooting started, everyday things assumed a new possibility: a connection with The Movie. As I drove down the highway that morning, I saw a crane truck in another lane. I wondered if it was somehow involved with the movie. (It was.) When I got off at my exit, I noticed that the boat house parking lot under the highway overpass – normally unremarkable and filled with commuters’ cars – was filled with trucks and bustling with activity. Later, after the police and road crews closed various ramps, we were treated to the sights of cars and trucks occasionally driving forward for a take, then carefully backing up to prepare for another.

There’s an interesting juxtaposition of “realities” when an everyday location is used in a movie. On the one hand, there’s a change in how that location is viewed by those of us familiar with it. For us the interchange was no longer just a highway; it had become a movie set! It had assumed a little bit of Hollywood glamor and would soon be famous – associated around the world with a gripping chase scene in the movie Salt.

Then there’s the fact that when we watch the movie – and I suspect there’ll be a lot of local people checking it out, if only for that chase scene – we’ll be watching it in a way different from those unfamiliar with the interchange. The general public will be watching the action and wondering what happens next. If the movie is done right, people may even believe it’s happening just as they see it.

But for those of us familiar with the location, we will be at least subconsciously trying to figure out exactly where each cut in the scene was made. (When I saw the movie Ironweed, which supposedly took place in Albany, I found it a bit distracting to recognize scenes that were supposed to be Albany but which were actually Troy, Slingerlands, Hudson and elsewhere.)

Beyond that, we have been privy to a fact that’s clear to anyone associated with filming a movie: it’s all made up. While most moviegoers can lose themselves in the sights, sounds and plot of a good movie, we’ll know that chase scene is totally fiction. After all, we saw cuts made on ramps headed south here, and north there. We know that one shot will take place in the middle of the interchange, while the next shot might take place on an access road half a mile away that runs in the opposite direction. Those who have seen even part of a movie filmed will have a very different sense of its “reality” than those who haven’t.

Finally, there is another reality that those of us who watch a movie being made quickly discover. At its most basic level, filming a movie involves a lot of boring times just sitting around, waiting for the Powers That Be to set up the next shot. The scene that took two weeks to be filmed in Albany will probably take less than five minutes in the actual movie. In Fantasyland, time really is relative.

That's not the script...bored drivers find time to read between shots

Eventually, the mystique of watching movie fantasies being made tends to wear off. There are the hassles of trying to get to or from work when major commuter ramps are closed for movie-making. There’s the “been there, done that” feeling that arrives as we see yet another day of cars parked in long lines and only occasionally moving forward or back. And there’s the annoyance of trying to get work done when many car horns start blaring below your window for a take in the simulated traffic jam. While we had been excited to see the movie crew arrive, we also weren’t that sorry to see them go. 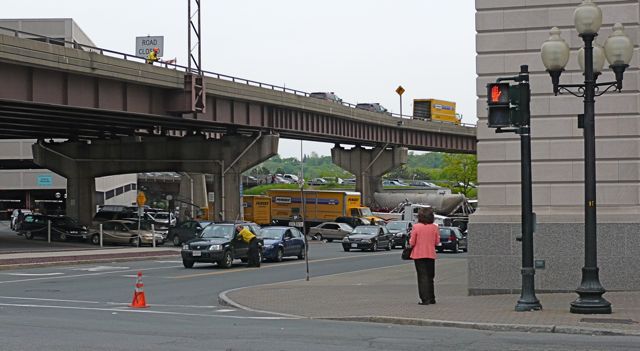 In the end, our brush with Hollywood and its fantasy creators was an entertaining break from daily routine. And I think many of us will be looking forward to seeing the results of this creation up on the big screen…or perhaps (eventually) a not quite so big TV screen. We may also retain an alternate, more glamorous view of the highways that have been so much a part of our daily routine.

And at least one of us (that would be me) has been able to find yet another example of how reality can be relative, dependant on your own perspective and experiences. You never know what can happen when Fantasyland comes to town…

I've been interested in current events since at least the mid 1960's, and in ideas from modern science since the early 1990's. My website Quantum Age, which has been online since 1996, presents a basic framework for applying ideas from modern science to today's world. In this blog I discuss current events in the context of that framework.
View all posts by Dave Higgins →
This entry was posted in relativity and tagged movies, reality. Bookmark the permalink.