In the sadness and disappointment I felt after the recent US election, I was reminded of similar feelings I’d had many years before, in January 1998. That earlier loss hadn’t involved politics or friends or family. It had been related to an aspect of the Mad River Glen ski area that I had grown to love.

I’ve been an avid skier for a long time, and for many years I’ve had a great fondness for skiing in the woods. Unlike open trails, tree skiing offers a sense of both adventure and intimacy with nature. Since 1996 I’ve worked on crews clearing the “secret tree runs” in Mad River’s woods. In the winter I go back and ski the runs I’ve cleared, as well as others I’ve been shown by friends or discovered on my own.

On New Year’s Day, 1998, a friend showed me a whole new area of tree runs I hadn’t known existed. After that day I couldn’t wait to get back and explore that area some more. But then, only a few days after I’d skied it, Mad River was hit hard by the great ice storm of 1998. When I returned in mid-January, I found all of my favorite tree runs ruined, filled with impenetrable tangles of downed trees and branches. Like everyone else there when the mountain reopened to skiers, I was devastated. It appeared it would be many years before the woods would be skiable again.

However, the previous owner of Mad River Glen was philosophical. She observed that ice storms were simply one of Nature’s ways of renewing the forest, knocking down the weak and diseased trees and opening things up for new trees to sprout. It seemed like a faint hope at the time, but it was still a hope.

That spring Mad River sprang into action to repair the extensive damage. While volunteer crews usually only work in the woods during the fall, in 1998 there were workdays once a month throughout the late spring and summer, along with a few more in the fall. And while work crews usually only use hand tools like loppers, saws and scythes, that year professionals with chain saws worked with us.

Moving a tree out….

…to leave a clear run.

It was hard work, but by the time the next winter arrived we once again had numerous tree runs open for skiing. Other parts of the woods were marked off for several years, to allow vibrant young trees to establish themselves. And in subsequent years we’ve continued working in the fall to reclaim tree runs. Today, the only sign of that ice storm is a more vibrant forest, through which we can find many runs through the trees. 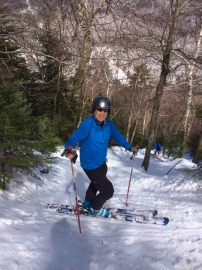 Back in 2010 I wrote about about failing institutions, in which I noted that many organizations have not adapted to today’s world. The leaders of these organizations are products of a system in which all major decisions have traditionally emanated down from the top.

This top-down approach stifles creativity and effectiveness. It slows the ability to respond to changing circumstances. It also leaves the organization vulnerable to  damaging news about problems in its operation. When such news has come out, these leaders inevitably compound the negative effects by attempting to “control the message” and to cover things up, rather than to acknowledge and correct the problem. As many have come to learn the hard way, the cover-up has often been even more damaging than the original bad news. For just one of many examples, consider the Catholic Church and its mishandling of its pedophile priests.

The fact is that many of our institutions – in all sectors – are sick with old ideas and traditions that are not suitable for thriving in today’s world. Their leaders are trying to address the problems they face with “tried and true” solutions that no longer work. In government, neither political party is immune. While their goals differed greatly, all of the candidates in last year’s presidential election started from a traditional top-down approach to solutions that in many cases will not work.

I have little doubt that we are in for a very difficult time over the next few years. Those in charge will do a lot of damage and many people will be hurt in one way or another. Our one faint hope is that, just as that forest at Mad River Glen was eventually renewed, in time we will move beyond all of the current negativity and destruction. With a lot of hard work, we can change or replace our failing institutions with more vibrant ones that better serve the people in general rather than just those at the top.

Last Saturday’s Women’s Marches revealed the energy of a great many people ready to tackle the challenges we face. Now it’s time to get down to work and clean this mess up.

I've been interested in current events since at least the mid 1960's, and in ideas from modern science since the early 1990's. My website Quantum Age, which has been online since 1996, presents a basic framework for applying ideas from modern science to today's world. In this blog I discuss current events in the context of that framework.
View all posts by Dave Higgins →
This entry was posted in emergent, energy/flow and tagged 1998 ice storm, adaptability, corporations, government, institutions, Mad River Glen, tree skiing, Trump, Women's Marches. Bookmark the permalink.